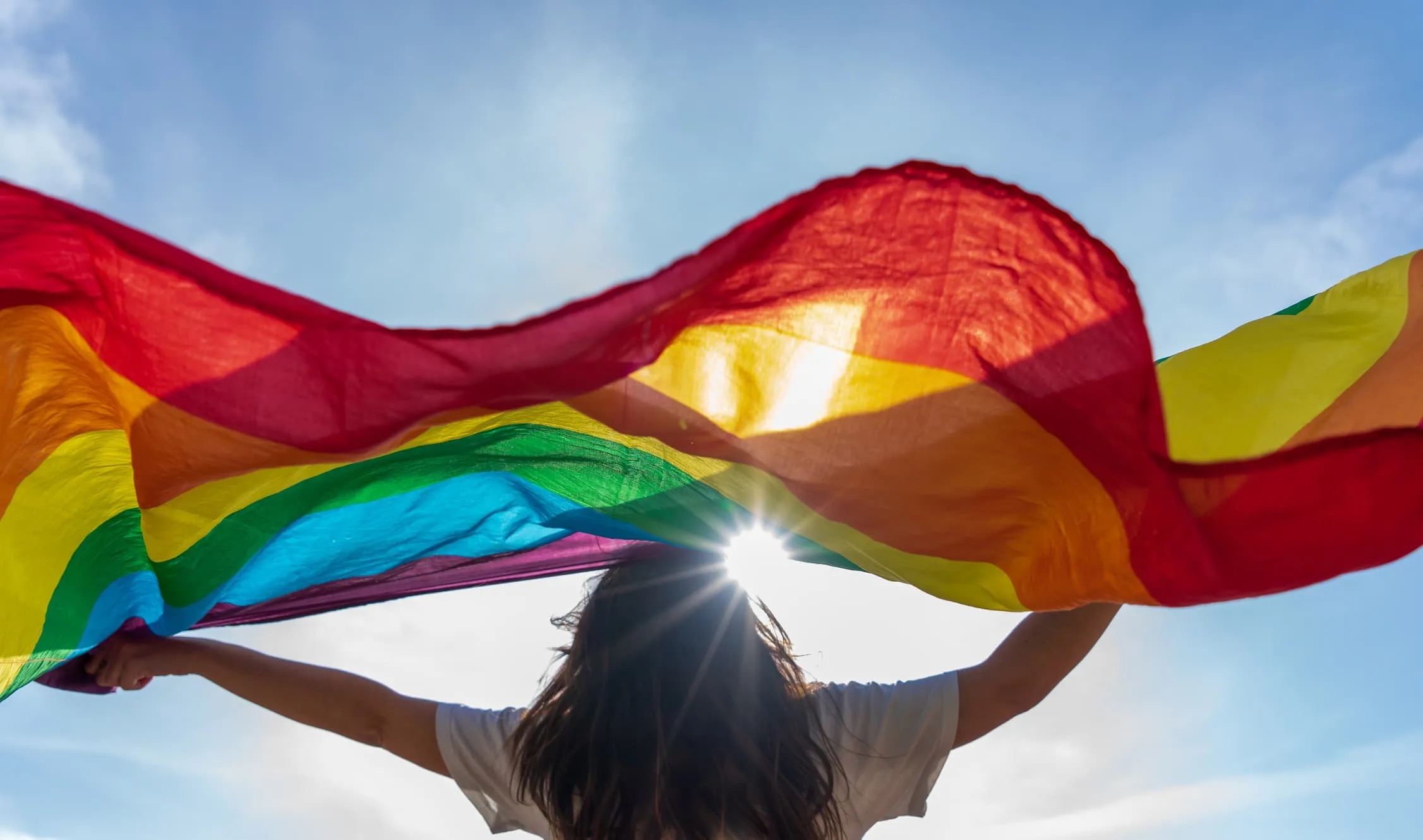 It’s been more than 5 decades since the Stonewall Uprising in June 1969, that marked a sea change moment for the direction for gay rights and the LGBTQIA+ community.

In honour of this, June is Pride month, a celebration of people coming together in friendship, acceptance and love. Showing how far LGBTQIA+ rights have come and how much work still needs to be done.  Raising awareness of the issues affecting the LGBTQIA+ community, educating people of its history and having pride in who you are.

We sat down with Harlesden local Warren Reilly, an award-winning designer and artist, to discuss his personal relationship with Pride, issues facing the community, and his LGBTQIA + role models.  Warren is the Creative Director of Fashioning our History, a Brent Culture Fund Project, and Freelance Creative Director for The Mixed Museum, Brent.

What are your reflections on Pride Month?

This year instead of celebrating at the Pride Parade itself, I was very excited to be involved in the first event to celebrate the launch of the Queer Georgian Social Season at Burgh House in Hampstead. Pride month is always an exciting time of year, but what I have been most excited by is that I have been able to connect with queer history for the first time during this period, a discovery which I hope to celebrate and promote all year round! The event entitled “A Queer Georgian Social Season – A Spa is Born: Seeking Pleasure in Hampstead” Allowed the audience to be taken back to a time when “queers” were more visible and accepted than what is usually perceived.

It was fantastic to work with the Opera Company called Les Bougies Baroques, an international vocal and period-instrument ensemble founded in November 2012 by Maltese conductor-harpsichordist/fortepianist Ian Peter Bugeja. I was commissioned by Les Bougies Baroques and Burgh House to use my skills as a social designer and applied artist to create a decorative set design inspired by Queer History during the 18th Century which became the backdrop of theatrical appearances from drag artists @adamall_drag , @applederrieres and @lasana_shabazz. 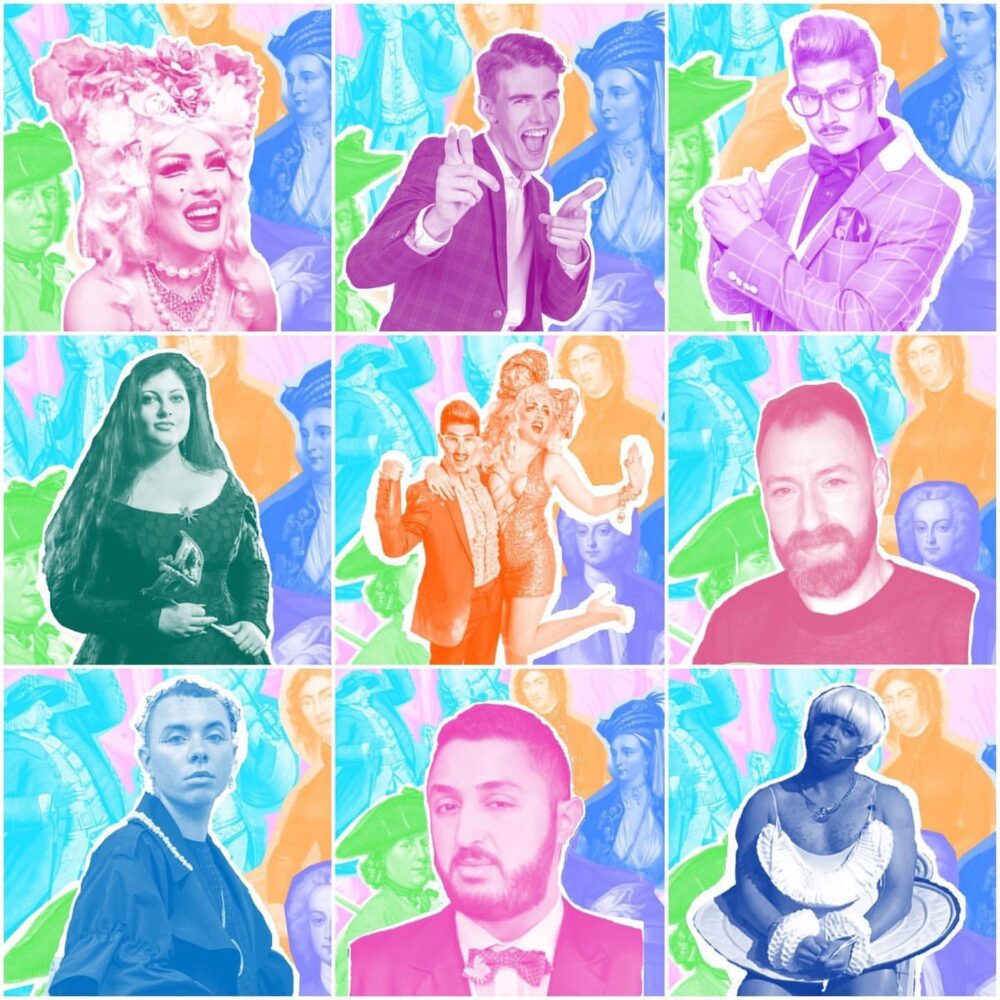 The event was perfect for pride month, Visitors Left their preconceptions at the door, and helped themselves Georgian punch from the bar, while I also ran a fan-making workshop that educated our visitors on the secret language of fans, which you may remember being introduced to via Horrible Histories back in the day! I also got to dress up as my alter ego “Molly Marie Anne”. This costume concept was very important to me as It comes from research I created within an essay during my Second Year at Manchester Metropolitan university entitled “How has Homosexuality and the concept of Effeminacy influenced Fine Art and Fashion History?”

Like many modern-day celebrities, styles and trends set by icons such as Marie Antoinette fed into the fashion and style of the Mollie Houses of 18th century London where queer people elevated their status for a more refined clientele by wearing the most fashionable trends of the period, be it through begging, borrowing or stealing… For me, this was the perfect way for me to celebrate Pride Month as it combined all my favourite things into one outrageous event. Not only was it entertaining but I believe events like this are vitally important to highlight and celebrate Queer Heritage and History and to celebrate and promote our hugely beneficial influence on the world of Art, Fashion, Music and Culture. 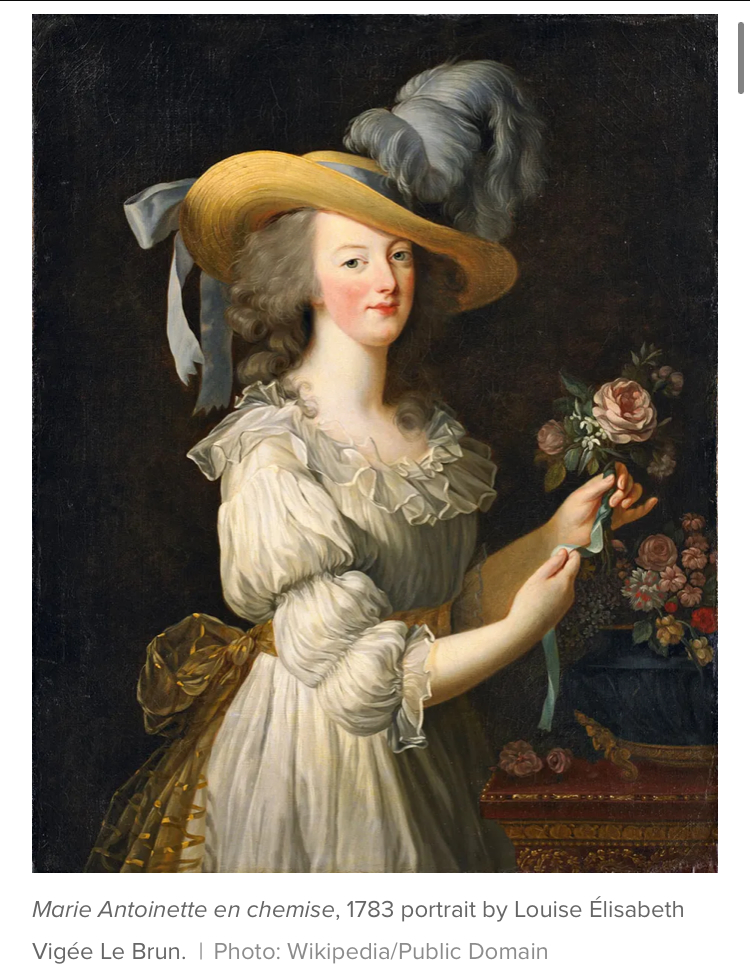 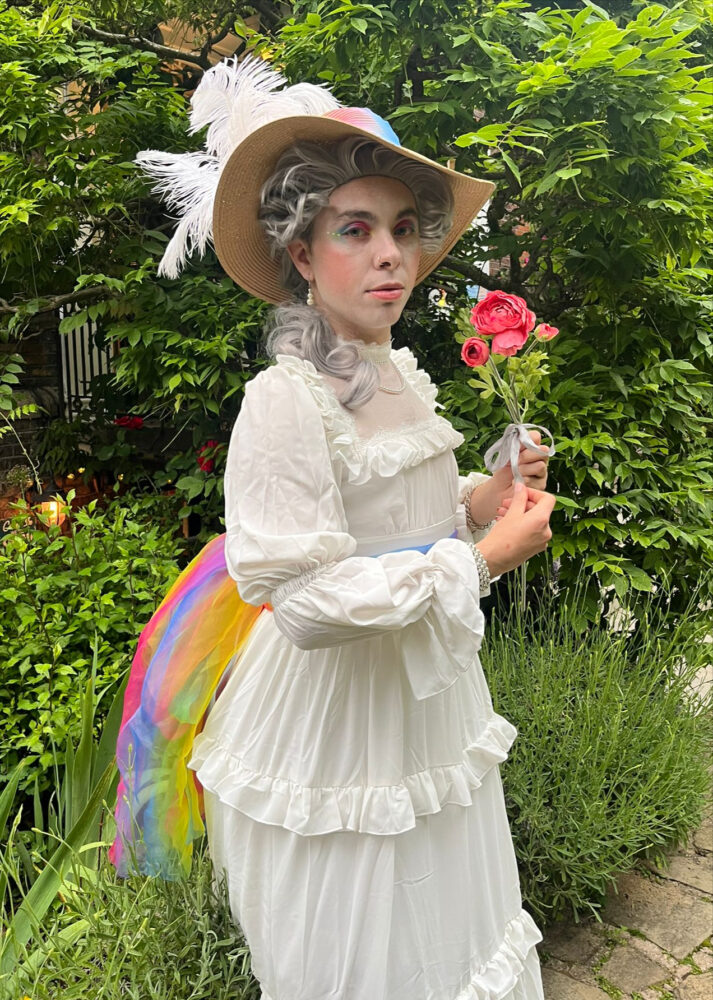 I was also delighted to be able to talk at an event held at The Victoria and Albert Museum, as part of the Exhibition Road Festival called “Change comes from all corners”. This free event was hosted in conversation with Dan Vo, a freelance museum consultant and media producer. He has been described by the Mayor of London Sadiq Khan as one of “our most inspiring LGBTQ+ Londoners”. 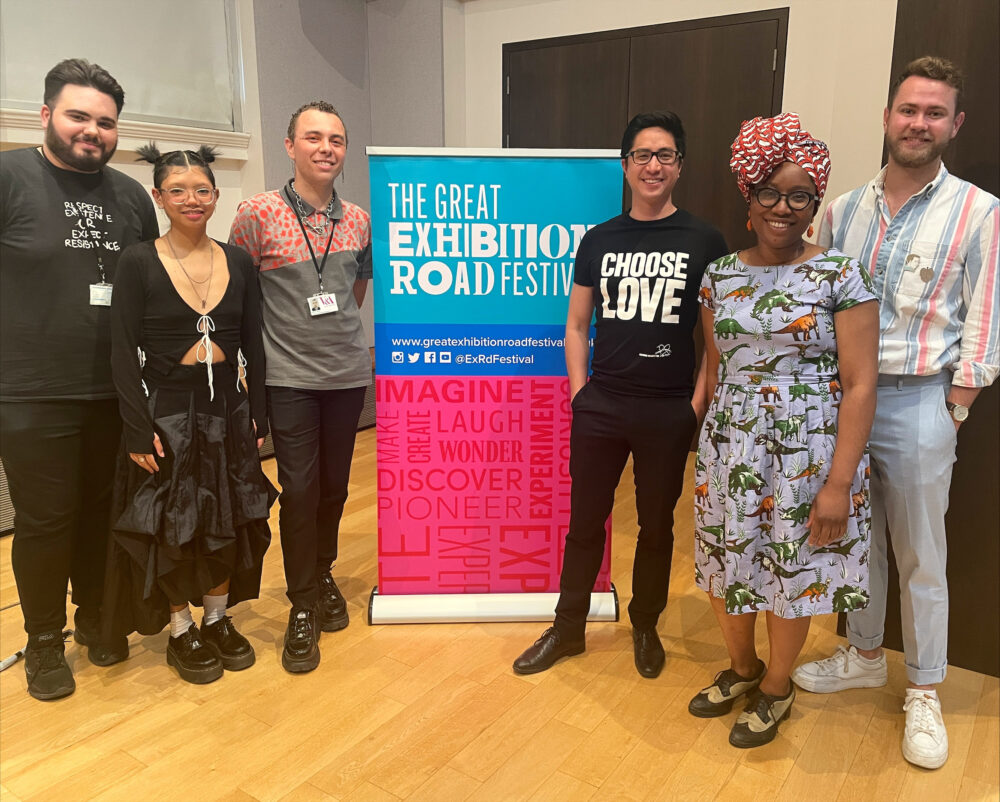 The talk included me as the new part-time retail supervisor at the V&A Shop as well as other members of staff including Arber Gashi and Sarah-Kristine Obina and explored what it means to be queer as well as people of colour, and how we are each making change happen both inside and outside the V&A. We discussed how important representation is for those who are part of the LGBTQIA+ community and are of ethnic and religious minority backgrounds, representing the values of diversity and inclusion at the museum.

What does Pride Month mean to you?

Pride month is vitally important. In a world where there are still 69 countries that have laws that criminalise homosexuality, It makes you realise why we are still fighting to be seen, heard, acknowledged and celebrated! In the past, Pride Month has been to party and celebrate. However, now that I have grown into a young adult, I realise the importance pride month has in regards to social history and in ensuring that our rights are protected. In addition to continuing to fly the rainbow flag for people who still experience prejudice, inequality, and oppression, it is a wonderful occasion to celebrate, reflect, and express thanks to those who have paved the road for a more equitable future.

What is an issue the LGBTQIA + community is facing that many people might not know about?

I believe that issues surrounding gender are of huge importance at present that is especially impacting the queer community. The acknowledgement of the Non-binary is hugely important and it’s something I think very deeply about. This was also a key theme within the talk I took part in at the V&A as my colleague Sarah-Kristine Obina is Non-Binary and spoke eloquently about the issues they face in the workplace in a world where gender is anything but fluid. They raised issues regarding locker rooms and toilets along with misgendering in the workplace and I felt that this was a huge issue that seems to be a hot topic but I am not seeing much action to tackle these issues. I believe the problem isn’t individuals wanting to be known as they/them, the issue comes from society more widely and its inability to consider a world where we do not need gender constructions to function as a successful society. It is an issue that I feel is growing ever more prevalent…

Are there any particular Pride-related events you are excited about attending?

London Pride is great but it’s lost a bit of its sparkle for me due to the issues regarding institutional racism that have emerged over the last few years. I would LOVE to attend black pride as I hear it’s being described as a Black, Queer Carnival – Alas, This year I had work commitments so I could not attend. I was introduced to Black Pride by a colleague at the V&A called Nadia Denton who runs African Heritage Tours at the V&A as a Volunteer, she recommended the new Film “Moments That Shaped: Queer Black Britain.” on Channel 5 which Charts key moments that shaped the history of Britain’s black queer community.

This film reveals how the largely undocumented struggles of activists created the platforms black LGBTQIA+ people enjoy today. It made me very excited to attend in the future. I always ADORE attending Brighton Pride, some of my happiest summer memories are there with my best friend Matilda Davy who studied Film there. I’ve never been to Ibiza but I think when the weather and the vibe are right it feels like a Queer Ibiza Rave on the streets which I adore. I have had some beautiful memories there!

Who are some of your LGBTQIA +role models?

Musicians like Lil Nas, Olly Alexander and Lava La Rue – Who I went to school with <3

Drag Queens of the World (In no particular order)

Lastly, Can you tell about us anything exciting you are working on ?

Spanning 300 years of Brent’s mixed-race and multicultural history through the lenses of art, photography and fashion, ‘By The Cut of Their Cloth’ (BTCOTC) is a online exhibition curated by local artist and designer, Warren Reilly (BA Hons) and digital archive The Mixed Museum.

Inspired by my 2018 dissertation, ‘Pageboys to protégés’ and Dr Chamion Caballero’s interest in the unnamed sitters in the Petersen Collection at Glamorgan Archives, BTCOTC explores Brent’s rich multicultural and mixed-race histories. In particular, it continues in the tradition of the Brent 2020: London Borough of Culture project ‘Fashioning our History’ by using fashion as a lens to look at marginalised social histories. 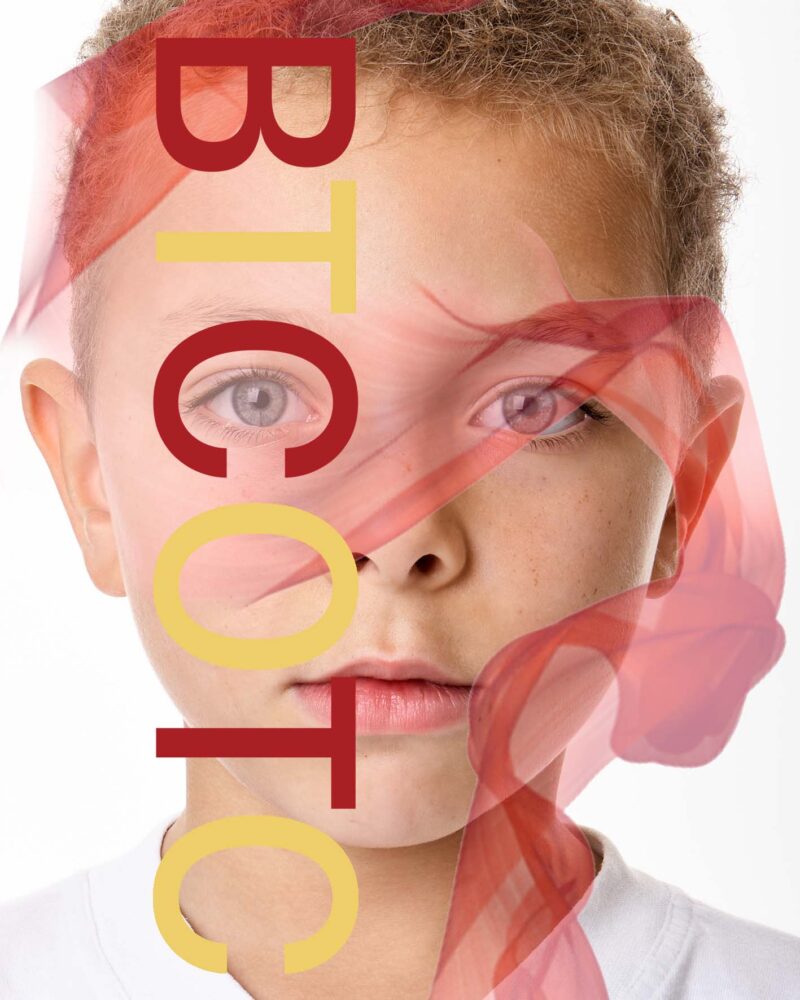 The Exhibition is split into 7 main sections including:

Stories of Colonial Brent – A look at Brent’s colonial past

Multiracial Brent – Stories of modern migration and multiculturalism from the borough

Archive Discoveries – What we Found in Brent Museum and Archives

We hope that BTCOTC will not only help bring attention to Brent’s long history of racial mixing but also show that the histories of ‘ordinary’ people are just as fascinating and valuable a resource as the stories of more well-known or influential people who are typically included in archive and museum collections.